Hey guys! Sorry for the slight delay in spoon-feeding you up-to-date information on the latest music sensation. I managed to go to a gig that I have personally been waiting a long time for. The band in question is Yelle. To quickly fill you in on some background of this cute little band, Yelle have been knocking about now for around 6 years. In their native France they are a highly revered and much loved alternative band. Even in the usually self-contained North American market and in mainland Europe they have a steadfast presence. Forming in 2005, they signed to Source Records and have made notable headway over the coming years, performing at Coachella and remixing for a certain Katy Perry. However in the UK there sadly seems to be an underlying frostiness towards these guys. A lack of understanding for some part perhaps. Regardless of the uphill struggle, Yelle are doing their best to melt the icy hearts of us channel neighbours by wooing us with joyous, uptempo electropop infused with avantgarde French spontaneity and cheeky European fun.

The gig was performed at The Haunt, after the club had a recent refit and name change and tonight was the launch of a new club night, so expectations and anticipation definitely enhanced the mood. The night was a sellout and several hundred loyal and eager new music fans crammed themselves onto the tiny dancefloor to grab a slice of the Yelle pie. Support came in the form of London's very own Cocknbullkid, who excellently warmed the crowd up with a sophisticated and hardy stage presence and confident performance; conjuring up visual similarities to VV Brown or a post-Gossip, more mellowed Beth Ditto.

Then, after a short interval riddled with heavy-bass interlude music the stage goes dark and this swamp-like green monster waddles onto the stage. True to form, singer Julie Budet opts for visual Gallic flair and extrovert styling that could easily give Marina Diamondis a run for her "I am not a Robot" generated money. Sweeping the costume aside, Yelle and her musical comrades light up the stage and blaze forth into a forceful and infectious performance heavy with steady beats, a lung-vibrating bass and 'Francais Discotheque' nonchalance. Each song flowed superbly into the other; silky and sublime. A barrage of one glittery song to the next ensured that the full Yelle experience was bestowed upon us all. 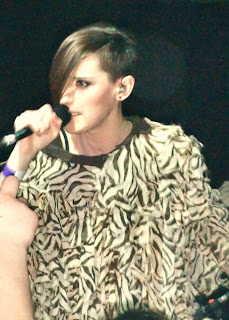 Treating us to the likes of "La Musique"; a spacious electro journey of twitchy synths and ghostly echoes, both steady yet compositionally maleable. Laced with Budet's Franco-infused dialectic it created a mesmeric, starry effect upon the audience. "Qui Est Cette Fille" started off juvenile and bubbly yet ploughs through into a stomping anthemic chorus filled with steady beats, voluminous synths, competent staccato keying and the serene, yet direct voice of Budet. The more mature songs were excellently complimented by the brazen and anarchic "Je Veux Te Voir", which I couldn't help be reminded of that Daphne and Celeste car crash "Oh stick you, your mamma too and your daddy".

Insulting comparisons aside, Yelle execute ostentatious bubblegum electro-pop with acquired skill and a certain 'Joie de vivre'. Rolling off one credible piece of music genius after another is not hard for this lot, and with their latest hit "Safari Disco Club" they pack a mighty overseas talented punch aimed straight at the English face of obnoxiousness. In "Safari Disco Club", Yelle possess a uniqueness that could stir the imaginations of an ever so slightly stagnant UK electro-pop scene. The tune is catchy, bold and childish in a way. Percussion instrumentation mixed with warbling synths and a whomping intermittent bass with the always voluptuous vocals of Budet gel in a way that makes the whole Yelle package rather charming and overtly colourful. So come on Yelle, inject some of your magic into the comatose UK scene, "OUI OUI OUI!"

Check out the excellent music video for "Safari Disco Club" and it's lovely B-Side "Que Veux-tu"; the video is constructed perfectly to compliment the Yelle way of thinking; a bit crazy, obsurd, fun and above all, enjoyable.

As always check out the Facebook/Myspace/Twitter pages of Yelle and show them some love. The album is now available to download online and in various record stores so get a hurry on, it's mega.
Posted by OWL BY NIGHT at 3/31/2011 No comments: LINKS TO THIS POST
Email ThisBlogThis!Share to TwitterShare to FacebookShare to Pinterest

Hoot Hoot to you fellow feathered friends. Whilst indeed all of us have been cleaning our feathers and gulping down the odd rabbit or two, I went to a couple of significant gigs. The first being Fenech-Soler all the way back in October. One word could sum up this gig; AMAZING. They performed at a small club in Brighton (UK), so the gig itself was fairly intimate despite the sell-out crowd and packed, sweaty atmosphere. Support came in the form of The Special K's, Kinema and Shake Aletti, who all did a splendid job in building up the crowd and generating a lively presence before the main gig.

When it was time though, Fenech-Soler were utterly brilliant and knew how to engage with a crowd. The songs they belted out were performed with verve and infectious energy; “Lies”, as previously reviewed on Owlbynight, was strong and ignited with a cumulative build-up of synths, bass, keyboard and guitar into a snowball of bounding madness. “Demons” was a skittish blend of continual and reliant cymbols, squeaky clean vocals and gusto drumming. “Stop and Stare” was a jabbing mix of 90's sounding trancey synths, oceanic keyboard work and icy yet smooth singing. These three tunes were the cream of the crop, but each song the crowd easily revelled in, becoming part of the Fenech-Soler space ride. Friendly Fires and Delphic should watch out. 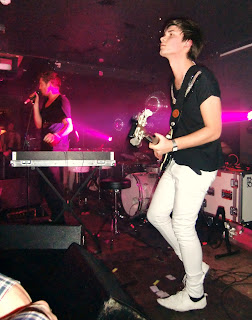 The dark dingy feel of club Audio coupled with the excessive smoke machines and bodged neon strobe style lighting gave the impression we had walked onto a tacky 1970’s space movie. The combination of the slightly meagre stage, the execution of the bands songs with professional ease and competence and the galactic pulses of heavy and thunderous indie-electro this Lincoln four piece were so amazingly capable of playing worked effectively. I half expected a randomer dressed as Darth Vader to come on and have a blast at the drums, but no, this was not the case.

Evil galaxy lords aside, I got to meet the band afterwards and seriously, these guys are humble and down-to-earth, chatting away and signing autographs, which was probably the last thing they wanted to do when the alternative option was to chill out with a couple of cans. Either way, if Fenech-Soler keep up this awesomeness, then surely these guys will catapult wildly into the more mainstream scene perhaps and be embraced by many music fans alike, and deservedly so. Don't forget to Facebook/Myspace/Twitter these guys up, buy their debut album if you already haven't done so, and submerge yourself in their glittered electro-indie goodness.

Finally the blonde siren with a killer set of vocals and sophisticated ‘noggin’ on her svelte shoulders going by the name of Florrie, did a show in my hometown around three weeks ago as part of her initial UK wide tour. First let’s set the scene, we arrive a tad late. There is no queue outside, no door fee, nothing. The general thought is along the lines of “this is not good news at all”, especially when the club next door is rammed to the hilt with clubbers. Upon entering, the stage is prepped and ready to be played on, but where are the crowds? They had simply not turned up. A spattering of around 40-50 were present at first suggesting bad promoting on behalf of Club Coalition in Brighton. Something that Florrie completely didn't deserve. Looking at the silver lining to the then gloomy thundercloud, the feeling was, in a distorted way, that the sparse turn-out added to the personality of the gig.

With a small but loyal crowd who had gathered, there was an overwhelming feeling of intimacy and it was clear that the people there just wanted to hear this girl, her bandmates, her unique voice and sheer talent at constructing superb records. Florrie herself exuded an air of regal chic and debonair; an English Rose, some could say, here to grapple with the seemingly neglected female-electropop-music sector. With Sky Ferreira, Little Boots, La Roux, Uffie and the like on a period of AWOL, Florrie sits neatly between the “Where are they right now?” and the “Oh...who is this appearing?”, cue a resurgent Beth Ditto, a formidable Claire Maguire, intuitive Oh Land and vibrant Yelle. Comparisons aside, Despite the circumstances mentioned, Florrie proudly stood tall and held her own. She possessed that fine thread that forms a crucial link between the performance, her persona, the band and the small crowd, and her web ensnared us all. 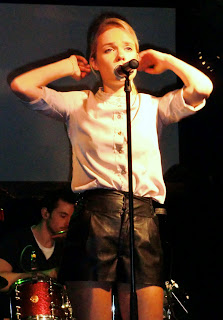 At times it felt like there was a wavering of overall engagement but that is completely understandable considering the factors leading to the gig’s outcome. It is essential to remember that Florrie is still an underdog of the internet-based music world and word is yet to spread. This tour is the first stepping stone, so naturally there will be a feeling of "the unknown". Florrie however, floated majestically from song to song. "Summer Nights" was an earthy array of steady beats, Miami vibalicious sweetness, sneaky synths and sleek vocals. The sincere and succulently tender “Give Me Your Love” built up to an anthemic pounding of drums, regal keying and sublime singing to create a dynamic and emotive chunk of indie derived pop at its contagious best. The Downtown urban grit and subtly enigmatic and sexy “Call 911” all showcased Florrie’s vocal and performance credentials. Silky, with attitude, and underlying depth to the lyrics, the composition of mature synthing and racey fervent beats epitomises the skills Florrie has honed down to a fine art form.

The Florrie mixture certainly seemed to contain the essence of Little Boots, Kylie Minogue and Uffie, and it's this blend that means Florrie has such widely diverse appeal. The spectrum of range and difference of songs blended with relative dynamism, something a lot of established artists fall way below the mark at achieving. I met Florrie after the gig to pester her for a photo and all I can say is; intelligent, genuine, charismatic. This lovely lass is a winner.

Florrie's intimate performance fired the critical salvo that sunk the critic's battleship named “Alternative female solo pop is dead” and looks to of won the battle. Can her big guns win the war? If you ignore the obvious and tacky sexual pun, it is clear she can, and will surely. The ingredients are there, the fighting spirit visible. Florrie, we salute you.

As always, check out Florrie's Facebook/Myspace/Twitter, show the girl some love, and hit up her homepage to download free tracks from her amazing "Introduction EP".

Posted by OWL BY NIGHT at 3/01/2011 No comments: LINKS TO THIS POST
Email ThisBlogThis!Share to TwitterShare to FacebookShare to Pinterest
Newer Posts Older Posts Home
Subscribe to: Posts (Atom)